In the words of Marianne Williamson: "Our deepest fear is not that we are inadequate. Our deepest fear is that we are powerful beyond measure. It is our light, not our darkness, that most frightens us. We ask ourselves, Who am I to be brilliant, gorgeous, talented, fabulous? Actually, who are you not to be? You are a child of God. Your playing small doesn’t serve the world. There’s nothing enlightened about shrinking so that other people won’t feel insecure around you. We are all meant to shine, as children do. We were born to make manifest the glory of God that is within us. It’s not just in some of us; it’s in everyone. And as we let our own light shine, we unconsciously give other people permission to do the same. As we’re liberated from our own fear, our presence automatically liberates others."
"To laugh often and much; to win the respect of intelligent people and the affection of children; to earn the appreciation of honest critics and endure the betrayal of false friends; to appreciate beauty; to find the best in others; to leave the world a bit better, whether by a healthy child, a garden patch or a redeemed social condition; to know even one life has breathed easier because you have lived. This is to have succeeded." - Ralph Waldo Emerson 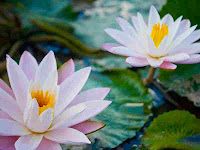 We met Michael while we were house sitting in Sacramento in 2004. I share this because when my sister, Sherry, was laying in the hospital last April I acted like the children in this story. I am sure she wanted to say things to us but we kept telling her "later.... when you feel better. There will be plenty of time to talk about these things. You're going to be OK." But she wasn't going to be OK and we found out later that she spoke with nurses instead so she wouldn't upset us... I wish that we could turn back the clock and handle things in a very different way.
My dear friends,


Believe it or not, one of the most enriching aspects of being a minister is conducting memorial services for families.  Lately, it seems I have been doing more memorial services than normal.  Many people are choosing this time to exit the earth plane.  (Do they know something we don't?)

In some rare instances, I have the opportunity to meet with the person facing imminent death to discuss their beliefs about life, death, purpose, and their desires for their memorial service, which I refer to as their "Celebration of Life Service."  What a privilege it is to openly discuss end-of-life issues with a person and his or her family.  It is so healthy to approach the end of this life expression honestly.  Often times, there is great reluctance on the part of family members to release their loved one, and they shut off any attempts to broach the subject.  That always saddens me because in most situations the dying person wants, and needs, to talk it through.

I recall a time I was doing my chaplain residency at Baptist Hospital in Kansas City, Kansas.  When I arrived for my shift, I was given the list of patients who had been assigned to me.  I was to call on each one and minister to them as best I could.  That afternoon I was tired and out of sorts.  I really didn't want to minister to anyone that night; fact is, I felt in need of a chaplain myself, but there I was.  One of the names on my list was a woman who had just had major surgery and experienced serious complications.  She had requested a visit.  As I walked into her room, I saw that she was sleeping peacefully and I selfishly thought to myself, "Oh good, I'll just leave my card, a note, and a Daily Word."  I stood by her bed and said a prayer for her and her medical team.  As I was filling out my report before I left her room, I became aware of the woman in the bed by the door.  She was surrounded by her children who were waiting for her to be released that afternoon.  She sat quietly in her bed as her children bustled around her, fluffing pillows, pouring water, and talking animatedly about trivial matters.  As I walked past her bed on the way out, "something" told me to stop and speak to her.  I stood at the end of her hospital bed and our eyes met.  She had soft, kind, sad eyes.

I joked with her and commented, "Well, you look like you're being well taken care of.  You've trained them well."  Her kids seemed very nervous and kept reassuring her that she was just fine and soon would be her old self again.  The woman ignored them and kept her eyes locked on mine.  Then she said, "I am checking out soon."  The kids continued to chatter . I instinctively knew she wasn't referring to checking out of the hospital, she was soon to check out of this life.  I said, "You seem to have great peace with that."  She replied, "I do have peace.  I have had a wonderful life and it's my time."  The nervous energy among her children amped up noticeably, and they started admonishing her, "Oh Mom, just stop that!  You're going to be fine.  You'll outlive us all."

She ignored them and continued looking at me.  I asked her what was so wonderful about her life, and she went on to tell me about her late husband, who she would be joining soon, her children and grandchildren, the travels they had enjoyed with the family, et cetera.  I stood there listening, fully aware that this was the only way she could communicate to her children that she was dying soon and wanted them to know she was at peace.  I remember thinking, "Ah, this is why I am here.  I was sent to this room, not for the sleeping woman in the other bed, but to be here for this dying woman so she could use me to communicate her truth to her children, which they had been stifling."  The room was quiet now and one of her daughters, starting to cry, bent down to hug her mother.  One of the sons glared at me.  I knew my work was complete now and I wished her a safe journey and a glorious reunion with her husband.  She looked at me with such gratitude as I took my leave.  We smiled a secret, knowing smile and nodded.  I walked out feeling lighter and very grateful that Spirit had used in me in such a way.  In Unity we often refer to our Divine appointments and I felt this was definitely one of those.

We all have a Divine appointment with death, (yes, you too) so the best way to prepare for it is start by discussing your wishes and beliefs with family and friends sooner, not later.  If you are open and unembarrassed about death, your family and friends will most likely take their cue from you.  The conspiracy of silence many people want to enter into concerning death robs every one of the rich gifts of authenticity, reconciliation and closure.

In the meantime, live as you will want to have lived when you are dying. Carpe Diem!
You are loved beyond measure.

QUOTES FOR THE WEEK:


"An individual has not started living until he can rise above the narrow confines of his individualistic concerns to the broader concerns of all humanity."  --Dr. Martin Luther King, Jr.

"Open your eyes; look within.  Are you satisfied with the life you are living?"  --Bob Marley

If you do follow your bliss, you put yourself on a kind of track that has been there all the while waiting for you, and the life you ought to be living is the one you are living.

When you can see that, you begin to meet people who are in the field of your bliss, and they open the doors to you. I say, follow your bliss and don't be afraid, and doors will open where you didn't know they were going to be.

If you follow your bliss, doors will open for you that wouldn't have opened for anyone else. People say that what we're seeking is a meaning for life.

This is our way

A Spirit dances within you. This is our way of it. · We flow like a river · We chant until we are one. Ours is a journey story · It is what happened long ago; · It is what has been forgotten. · It is what we remember once again. We follow a tradition, the way of the hero; · The way it was always done · By people of the earth. It is a feeling of warmth · The sound of heartfelt voices

It is life · dancing inside of you.”
— Michael Mervosh

“How terrible to think of not being the hero of one's own life.

This is the role for which each of us is cast, no matter how unsuccessfully we play it. And if the part seems too big, if we picture the hero as being ‘more than life-sized’, it is because our daily life has dwindled, become less than real, and only small proportions seem natural to us...

Human existence is significant, life essentially makes sense in spite of our confusions. Man is not here on earth by accident but for a purpose, and that whatever that purpose may be, it demands from him the discovery of his own meaning, his own totality and identity.

A human being is born to set out on this quest, his quest, like a Knight of Arthur's court.”

The Hero's Journey
By 1981 we had become disillusioned with our lifestyle: regular 9 to 5 jobs, house and car payments, living from paycheck to paycheck, always looking forward to the weekends to catch our breath, etc. As a result, we quit our jobs, and moved to the North Fork of the American River, camped out in a tent and mined for gold over the next 7 years. That was just the beginning.